A personal recollection, by Archer Endrich 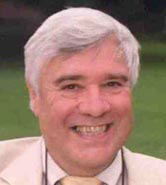 CDP and the electroacoustic community throughout the world is deeply saddened by the news that Richard Orton, one of its primary visionaries and a founder member of CDP, has died unexpectedly after a brief illness. The scope of his contributions to music, and to electroacoustic music in particular, is extensive.

His career in music began in earnest when he won a Choral Scholarship to St. John's College, Cambridge. Possessing an outstanding voice, he sang tenor in the College Chapel Choir for the next four years while earning the B.A. and Mus.B. degrees in music. It may be that the musicianship developed during these years flowed over into everything he did later.

He became a Lecturer in Music at the University of York in 1967, and by 1968 had established the University's Electronic Music Studio, the first in the North of England. By the time I arrived in York in the Autumn of 1972, the studio had voltage controlled synthesizers (the VCS-3) as well as 'classical' tape facilities. His creative thinking also manifested when he proposed the Project teaching system that Professor Wilfrid Mellers made such a feature in the Department.

In the Project System, undergraduates study music through a series of modules, or projects, one each term. These are selected from a larger list of projects offered by members of staff (these can change every year to reflect their current interests) and the course each student takes is thus largely designed by them, for them. One important exception to this is the 'Practical Project', which takes place in their first term and in which they all work together to put on some form of multi-media project, thus getting to know each other, facilitating collaborations between performers and composers and, since it is open to everyone in the Department to take part, breaking down inter-year barriers.

For example, in my first year, the Practical Project was a performance of Purcell's Dido & Aeneas. Each student found hidden strengths and got to know everyone else in the Department while learning about the practicalities of musical performance. A couple of years later Richard led the 'Electric' project in which the focus was on all kinds of electronic music-making, and for which he wrote some of the music used. Collaborative effort on many fronts flowed naturally from this starting point, and Richard's Project system idea has continued to bear much fruit down to the present day.

His teaching activities included preparing materials for the Open University (e.g., 'Arts and Environment' Unit 3 & Unit 11). In 1981, his book Electronic Music for Schools was published. In the early 1980's, with a clear understanding of how the field of music was going to develop in the future, he realised how much technical expertise composers were going to have to absorb. Always going to the heart of the matter, he could foresee the future demands of working with electronics to create music, especially now that digital technologies (computers etc.) had come onto the scene. He therefore had the idea to combine musical and electronic studies and collaborated with Ross Kirk from the Department of Electronics to design and set up an altogether new type of combination course which they called 'Music Technology'. The postgraduate version of this took its first students in 1986, with an undergraduate course following a few years later. Dave Malham's technical expertise helped create and support the infrastructure needed for the Studio and the course. As far as I know, this concept of 'Music Technology' as an academic discipline was unknown before this time, so Richard and Ross and Dave pioneered a whole field of musical study prevalent around the world. Such was the measure of the man.

Also in the early 1980's, Richard began meeting with other colleagues in York, forming 'Interface', an informal discussion group that occasionally put on performances of contemporary compositions. This group, which included Richard, Trevor Wishart, Dave Malham, Andrew Bentley, Phil Ellis, Christopher Fox, Graham Hearne and myself, gradually evolved into the Composers Desktop Project ('CDP') after everyone agreed to get the same computer, an Atari ST (with MIDI ports). At a key meeting held in Richard's home, I presented a chart summarising some software ideas, and Dave Malham spoke about how he had been thinking of some hardware to smooth the burst rate of the Atari ST's game port to a steady audio stream – the CDP was in effect born. With software developed by Martin Atkins (soundfile operating system), Andrew Bentley (signal processing) and Rajmil Fischman (graphic user interface), the CDP system was ready and we started releasing its direct-to-disk recording and sound manipulation systems in 1987. Richard, ever the visionary, was at the heart of this development and remained a contributor and advisor to CDP until his death.

Richard's composing career was distinguished, marked by a unique combination of innovation, clarity and beauty. The story of all these compositions is too long to tell here, but I would like to recount a few of my own vivid memories. One is taking part in a performance of Sawlo Seed (1972), a piece for "any number of voices" with the music and text written in a rectangle so it could be read and put together from all four directions. Another was attending a performance of Brass Phase (1974) for 12 brass instruments. The players were seated on chairs that revolved so that their music spun around in all directions like garlands of sound. While at York, along with Roger Marsh and Steve Stanton, I was one of the three original performers of Mug Grunt (1972), a theatre piece in which the performers uttered into and moved mugs in ways precisely notated in the score. Textually, the piece moved from inarticulate to articulate. Beneath its bizarre appearance, the music had complex rhythmic structures, including a ca. 2 minute rhythmic convergence passage. I also have keen memories from Timescape, a huge multi-stylistic composition performed in York Minster as part of the 1984 York Festival. Based on the 'Mappa Mundi', it included a medieval band, a choir, electronics, and Yvonne Seymour's soprano voice soaring down from the galleries high above. Finally there is the sharpness and clarity of Stellations (1996), composed for 15 solo strings with his own software program, Tabula Vigilans. Its sonorities had the cripsness of cracking ice.

Mention of Tabula Vigilans brings us to the last part of Richard's life, in which he was increasingly preoccupied with software development. Tabula Vigilans began as a part of the Midas Project with Ross Kirk: software to run on Ross's advanced digital signal processing hardware. Based on the concept of a spreadsheet in which all values can be updated at once, it is both a real-time MIDI instrument and an algorithmic music programming language of exceptional clarity. Using this, he went on to write Score-Builder, an extension of Tabula Vigilans concepts which can create an output file that can be used to create hard-copy music printout using a notation program such as Sibelius. On top of this sits Form-Builder which enables the composer to set out the parts and overall design of a composition. Richard had plans to integrate these three programs into a single package.

My brief account of Richard's life and work becomes more personal now, for I had the privilege of working closely with him since 2006 when we formed Wellspring Music. This emerged from meetings and conversations we had since he moved to Willoughby on the Wolds, when we shared ideas about algorithmic music programming with Tabula Vigilans. We worked together to develop ProcessPack, which he programmed in TCL/TK. ProcessPack is a high-level composition package that realises some of the micro-time-forms I have been researching, while Richard's fertile imagination and practical musicianship kept coming up with more and more ways to make and develop sounds, sometimes making use of CDP programs. We had years of work planned when he died, which I am determined somehow to take forward. His programming skills were well-honed by this time, and I was constantly amazed by the way he tackled and solved very difficult problems.

My visits during this period were very exciting, and also extremely pleasant because of his wife Rae's hospitality and culinary expertise – as well as interesting when she would recount experiences from her career in psychology. She gave Richard tremendous support during the years they were together. With her encouragement (if not badgering!), he completed the fair copy of his scores using Sibelius and prepared his catalogue. Their home was a tranquil and happy place, and my visits were joyful and productive. His scores and other information are now held at the Borthwick Institute, York.

In the words of Ross Kirk, his former colleague at York, "Richard was an inspiration to us all, both in terms of his own vision and in terms of the wider community to which he introduced us (particularly the CDP). His dedication to the cause was always utterly beyond any doubt."

Richard's creativity grew from his depth as a thinker, his inner confidence, and from a deep spirituality. His influence runs deep, a fact that becomes ever clearer in retrospect. We shall all feel his loss keenly.

Archer Endrich
With thanks to Dave Malham and Ross Kirk for supplying some detailed information regarding Richard's work at the Uiversity of York.
(23 February 2013)